Welcome to the online edition of Andrew F. Johnson’s Correspondence School For Automobile Body Makers, Designers and Draftsman. Since we’ve posted lesson papers in the same order as they are in the course, they appear on this site in reverse order. If you want to start reviewing the course from the beginning, start here: First Series: Lesson Paper 1 – Preliminary Instructions in Free Hand Drawing or check out the Table of Contents.

How the  Correspondence School For Automobile Body Makers, Designers and Draftsman worked.

First, a word or two about Andrew F. Johnson. Andrew F. Johnson was born in Nova Scotia in 1854 and he left home at the age of 16, getting a job at a carriage maker in Gray, Maine. By the time he was 30 years old, he was working for Brewster & Co. of New York City,  America’s most prestigious carriage maker, later to be known for their custom automobile bodies with unusual heart shaped radiator grilles. The move to New York was a great opportunity for Johnson. Today, if you want to learn how to design cars, you have your choice of design schools, like Detroit’s College for Creative Studies, the Art Center school in California, Pratt in New York and schools in Italy, Japan and elsewhere, but it’s not a curriculum that’s offered at every college. You still have to move to New York or Detroit or Milan or Pasadena or one of the other cities with a design school. In 1883, the only place in North America where you could learn how to design carriages was in New York City, at the Technical School for Carriage Draftsmen and Mechanics. Classes were taught at the Metropolitan Museum, three nights a week.

Before it was decided that every American student had to be on a college track or be considered a failure, few people availed themselves of higher education. They got jobs. If they wanted to improve themselves and their lots in life, they would enroll in night school. If there was no school teaching that skill nearby, correspondence courses of varying degrees of academic rigor were also popular.

Johnson showed great promise at the Technical School, graduating at the top of his class, winning an industry sponsored scholarship, the Paris Prize, that allowed him to study for five months in 1885 at the DuPont school in Paris, with Albert DuPont. DuPont is credited with bringing techniques from ship building and design to the carriage industry. In particular, DuPont taught his students how to design in three dimensions. One term, lofting, describing how shipbuilders drop plumb lines from their loft s to transfer locations from paper plans to physical space, is still used by car designers today.

Upon his return to  the United States, Andrew Johnson was probably the most technically proficient carriage designer in the country and he joined the Technical School’s faculty, introducing DuPont’s techniques to America. Seven years later, in 1892, when the director of the Technical School died, Johnson was named principal. As the automobile industry got established and grew, Johnson changed the school’s curriculum to meet the needs of the young industry but when the Carriage Builders National Association stopped subsidizing the school, it was closed. For a while, Johnson moved to Detroit, teaching automotive drafting at the city’s premier public school, Cass Technical High School. It’s possible that his job at Cass was arranged by the three of the seven Fisher brothers, of Fisher Body fame, who had been his students. Johnson eventually returned to Maine, from where he offered his correspondence course.

How the course worked was as follows. After tuition was paid  a student number was assigned. Johnson would mail a copy of that week’s lesson to the student. Before thermal transfers and photocopies, before mimeograph and Gestetner duplicators, the blueprint process and related cyanotype copies were about the only way to make copies for students at a reasonable cost. Johnson would first draw and hand letter each lesson, first in pencil, then in ink. Those masters would be used to create the cyanotype copies of the lessons mailed to students. Later, Johnson would have his lessons typeset and printed.

However he made the students’ lesson papers, they went out with the following instructions:

Instructions to Pupil. – Copy in black crayon the design on this sheet, increasing the size by about one-quarter, and observing all suggestions contained in Lesson Paper No. 1. Return to the instructor, by parcel post, prepaid, within one week after receipt, when the following lesson will be forwarded to you. Put no writing on either the copy or original drawing and do not seal the envelope. All questions must be sent by letter mail. Be sure, however, before returning your copy, to place upon it the number assigned you on the Teachers’ List of Corresponding Pupils, that he may identify it.

The reason why Johnson wanted the pupils to increase the size of the drawings was to prevent them from cheating, either tracing or using tools to transfer the design. The reason why he didn’t want any writing on the originals is pretty obvious, he wanted to use the same cyanotypes for as many students as possible. Cyanotypes were affordable but before the Xerox process was invented, copying texts and images was expensive. Johnson must have been very careful with his originals and he cared enough about them that they were saved and are now in the NAHC’s collection. They’re a great historical artifact and we’re very pleased to make them accessible to a much wider audience. 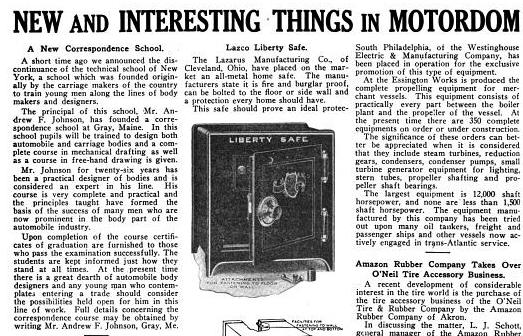 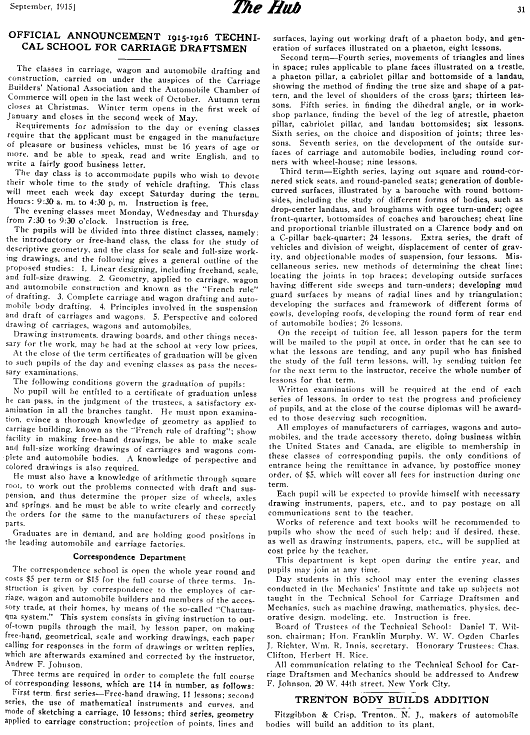 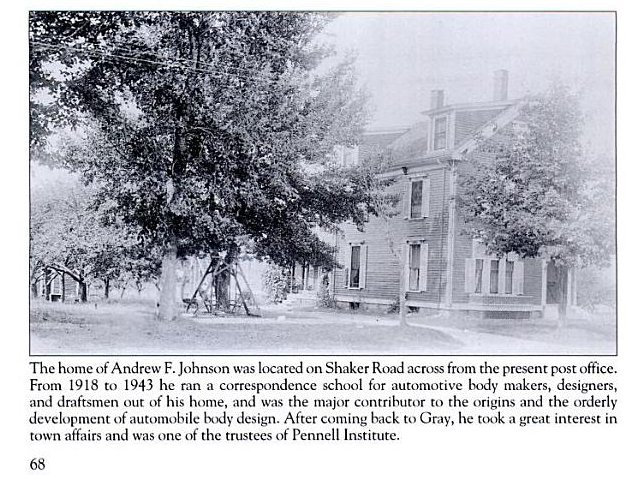 Click on the images to expand to full size. 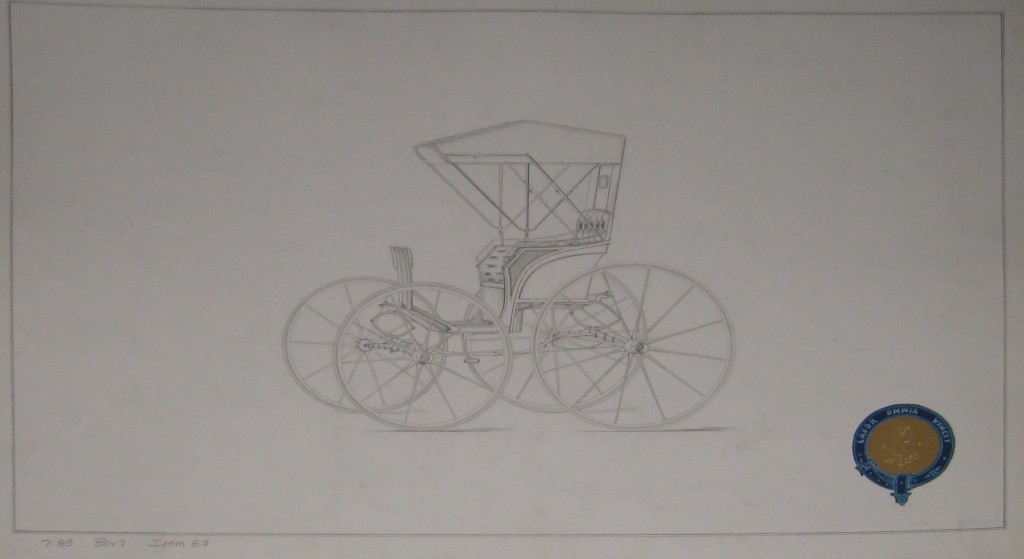 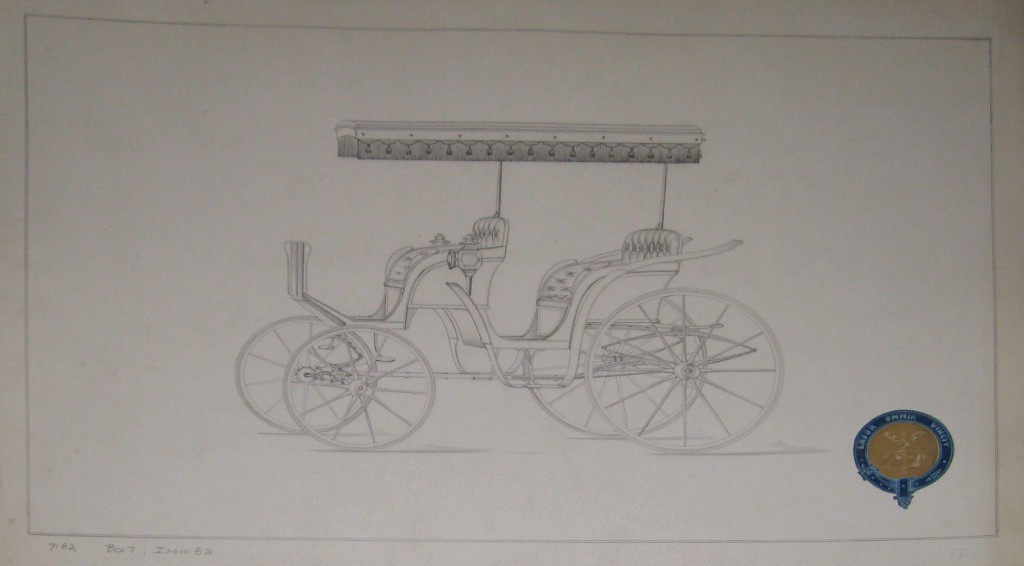 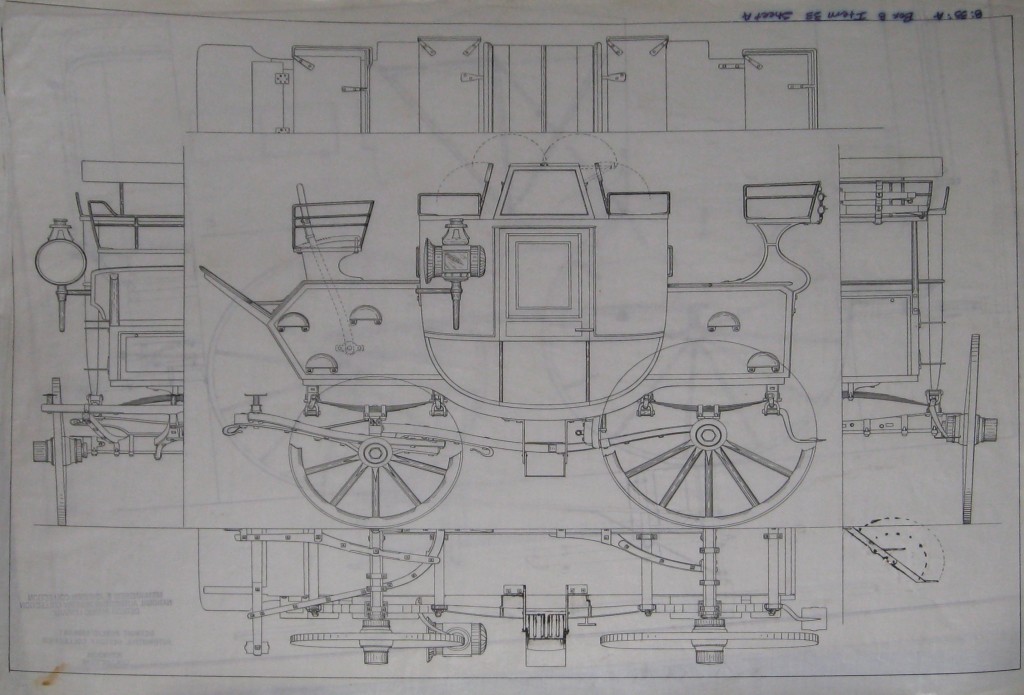 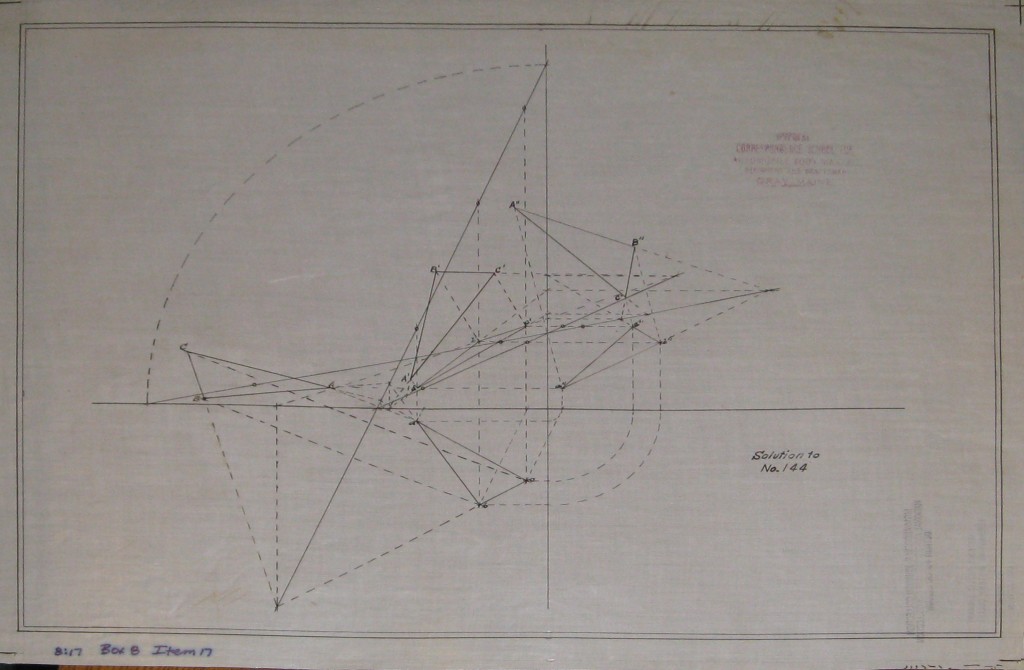 Click on the image to expand to full size 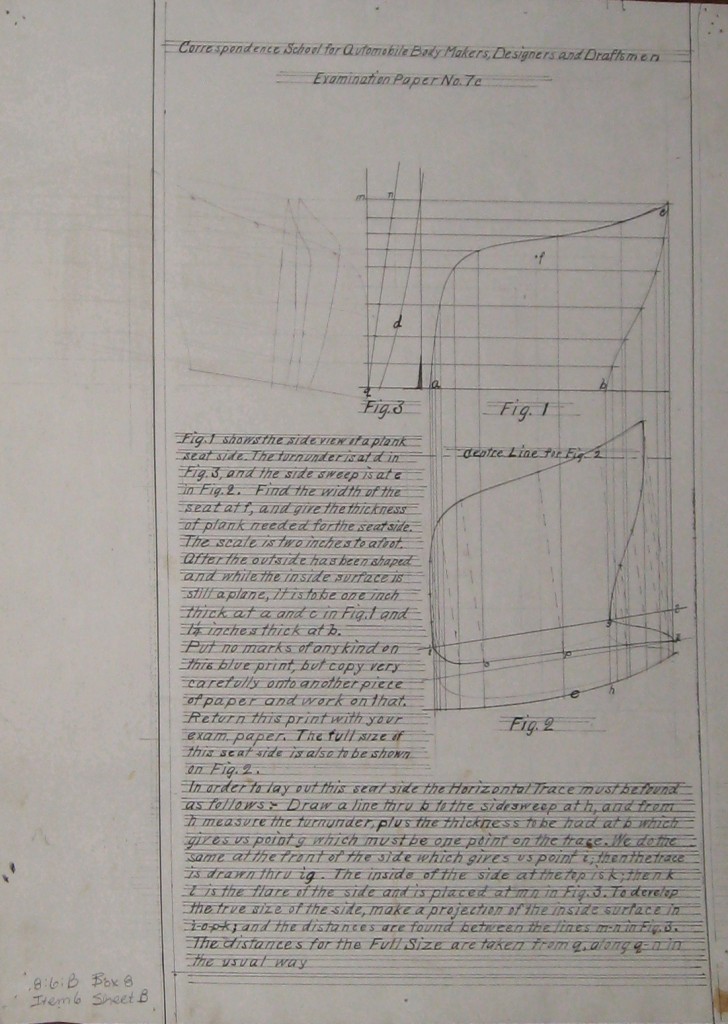 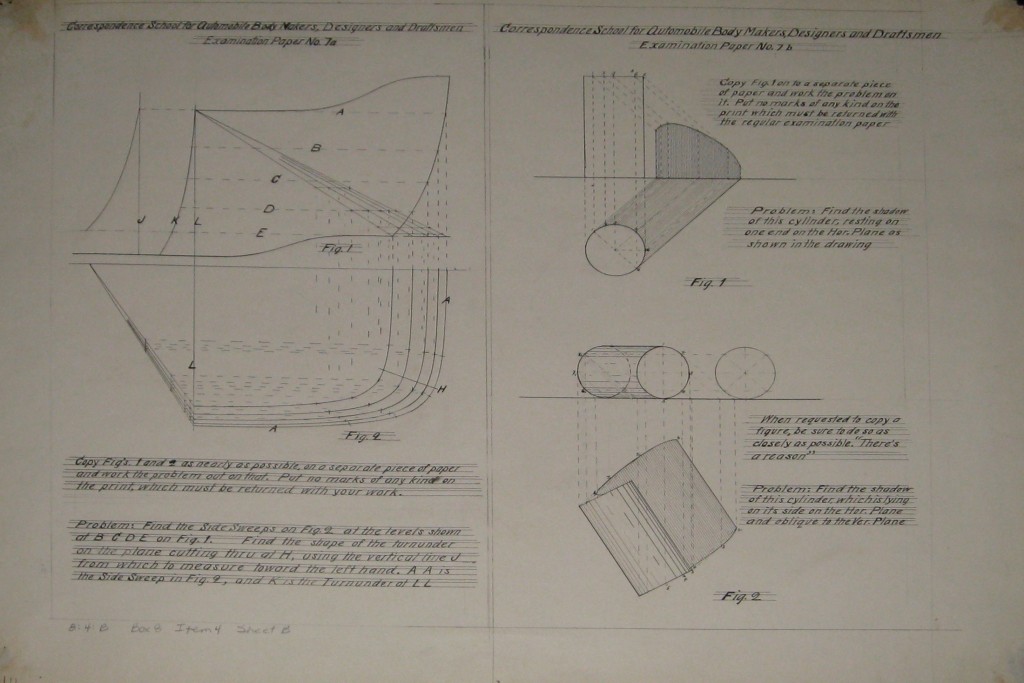 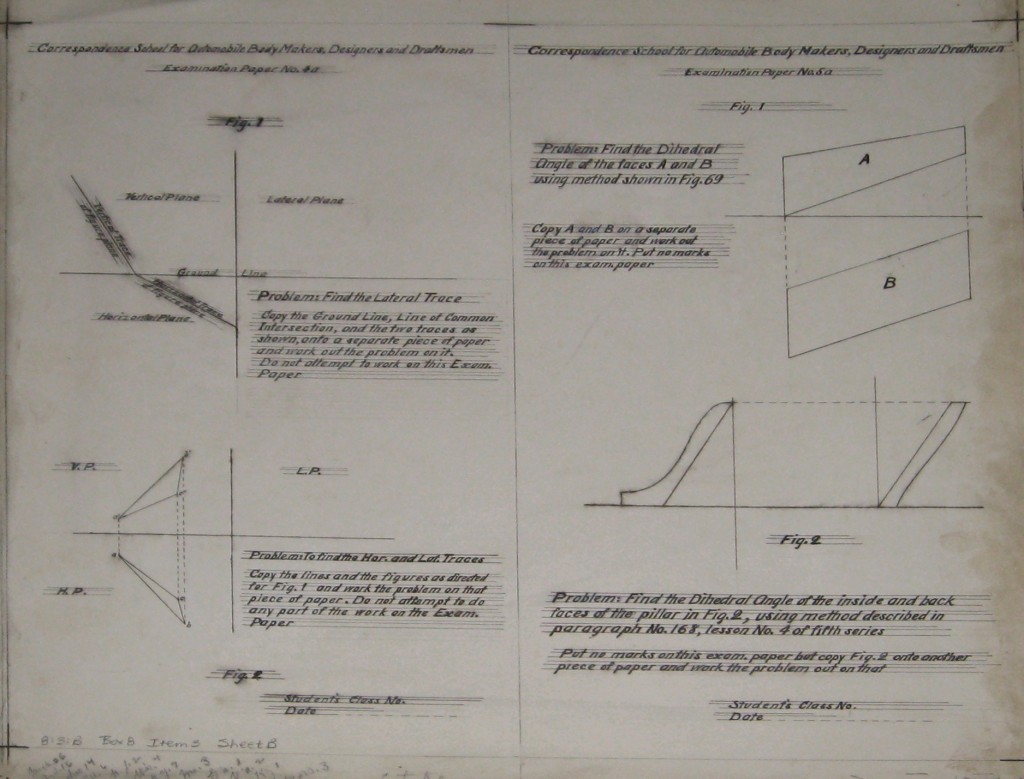 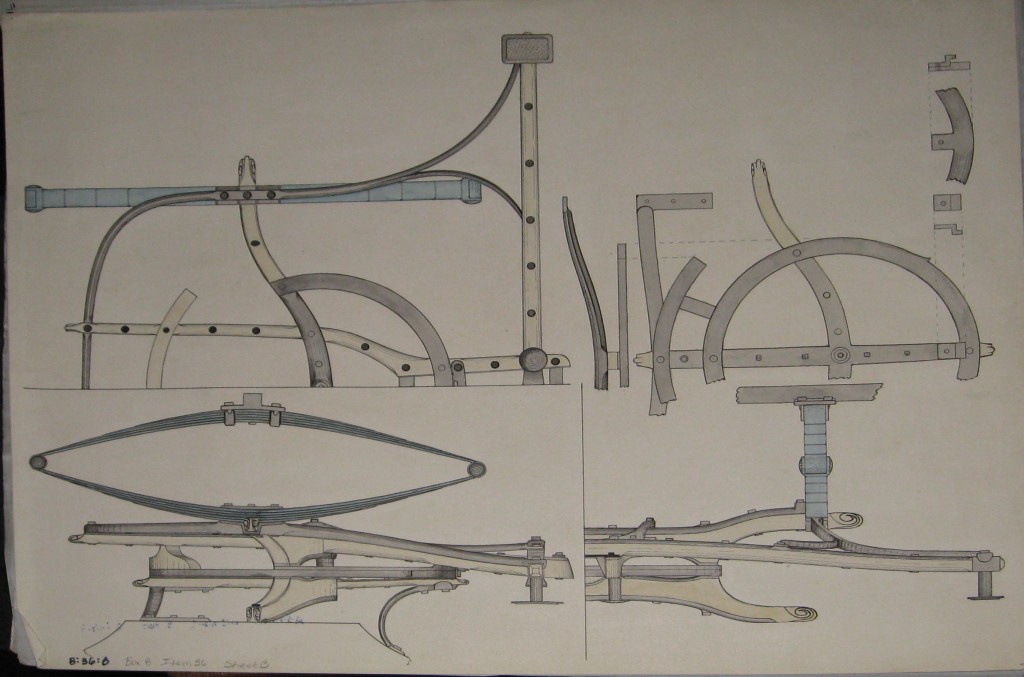 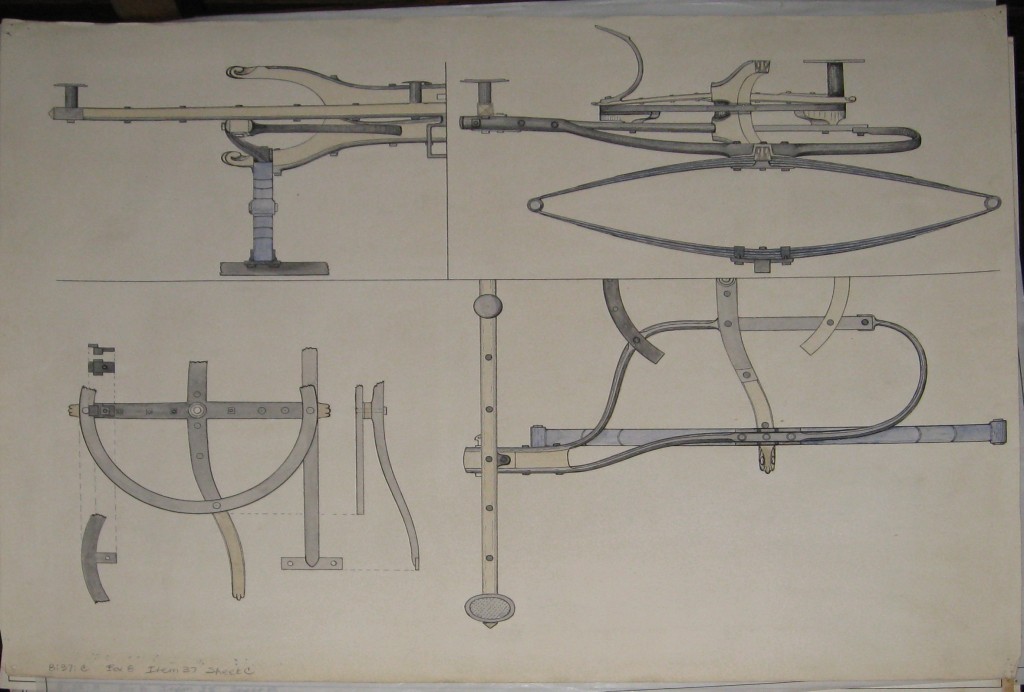 Sponsored by Cars In Depth

Cars In Depth - a realistic perspective on cars and car culture. The original 3D car site.

We recommend Michael Lamm’s A Century of Automotive Style